Notre-Dame de Paris cathedral is set to reopen in 2024

Notre-Dame de Paris cathedral is set to reopen to worshipers and the public in 2024, according to Culture Minister Rima Abdul Malak’s statement Thursday, nearly three years after the devastating fire. In the statement, she noted that the cleanup phase of the restoration project is now complete, allowing reconstruction work to begin. The 12th century cathedral is being restored to its previous design, including the 96-metre spire designed by architect Eugène Viollet-le-Duc in the mid-1800s, for which new timbers have been selected. 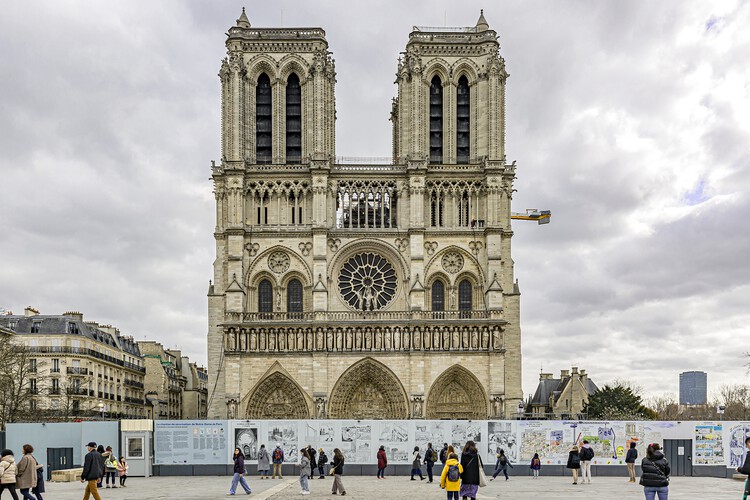 In the April 15 fire, the scaffolding built for the restoration survived the spire collapse but was deformed by the heat of the fire and ended up resting directly on the vaults, putting them at risk. In order for the restoration to proceed, the compromised scaffolding had to be removed, a complex project that required careful preparation due to its structural instability. After removing the debris, the cathedral was reinforced with wooden frames and braces were built to support the buttresses.

Notre Dame will receive a new landscape design: Bas Smets wins the competition to reinvent the surroundings of the cathedral

The project and the complex site are led by General Jean-Louis Georgelin, appointed by the French President, with the chief architect Philippe Villeneuve. During the securing phase of the restoration process, the stained glass windows, treasury, stalls, statuary, decor and light fixtures have been removed and are being restored, while the three rose windows on the facades are being restored. catering on site. The windows are expected to be installed again by spring 2023.

In parallel with the ongoing restoration work at Notre-Dame de Paris Cathedral, the city of Paris has launched an architectural competition to redevelop the area around the cathedral. The winning project by landscape designer Bas Smets will reinvent the square and the underground car parks that underlie it, including the archaeological crypt, the Place Jean XXIII located behind the cathedral, the banks of the Seine and the adjacent streets.

Twenty years after its Parisian debut and having received international recognition in 23 countries around the world, the French musical Notre-Dame de Paris is about to be performed at the London Coliseum. The original French production in London will be performed with English surtitles and a live orchestra from Wednesday January 23 to Sunday January […]

PARIS–(BUSINESS WIRE)–Henry Kravis, co-founder of KKR and his wife Marie-Josée Kravis, American citizens, are saddened by the fire at Notre-Dame Cathedral in Paris, like all of France and the rest of the world. In order to contribute to the financing of the reconstruction of Notre-Dame de Paris, symbol of French heritage, Mr. and Mrs. Kravis […]

As a fire ravages Notre Dame Cathedral in Paris, here are some facts about the iconic landmark that you can share with your child. Seat of the Archbishop of Paris Notre-Dame de Paris cathedral, among the city’s most famous monuments, attracts nearly 13 million visitors each year. Seat of the Archdiocese of Paris, the Gothic […]